5 Traditional Dance and Music in Morocco

Traditional dance and music have played an important role in every culture Including Moroccan culture. Such music and dance would give joy to every special occasion. For every generation, it’s a very important cultural tradition for Amazigh people in Morocco as well as in the whole of North Africa. Through this article, we travel through Morocco music history to introduce its traditional dances and art, as well as its musical instruments.

Due to the promises of globalization, Moroccans have begun to shun their traditions in favor of more modern practices. In addition, religion made this music and dance not preferable to practice. These reasons put Moroccan traditional music and dance in the way of disappearance however, it is the encouragement and efforts that some associations and locals do, to involve it in the modern lifestyle and participate in some big festivals in Morocco 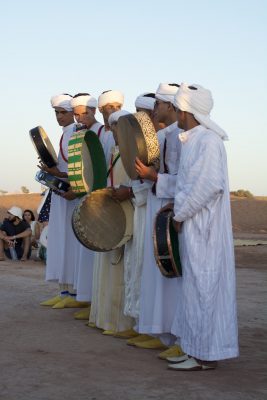 Ahidous is both music and dancing traditional Amazigh dance and music in Morocco Mountains, performed by both men and women as a line or circle. This traditional Music dance is well known in the region of the Middle Atlas mountains, as well as in southeast Morocco, especially in Jbel Saghro. During the wedding in Morocco, this is the best entertainment, and as an opportunity to find a future wife for the young people.

Men would wear white Jallaba with the hood, turbans tied on their heads. Women dress in different clothing, depending on the region, with different jewelry. Men hold the Idgem/Tallount, The special drumming instrument, singing poetry that women repeat its first part. The singing would take different subjects such as love, hope, bride, groom, wish…

Ahwach is an Amazigh Dance performed by men and women on the opposite sides. Playing drums and singing poets along with. This is the major dance for Amazigh people on the High Atlas mountains and sous region. Typically during the wedding, it’s an event that everybody is waiting for after the meals. The Ahwach dance is mainly played during the wedding. Last 10 years Ahwach has become one of the best performances in several Festivals in Morocco.

Ahwach dance may slightly be different from one region to another. Still, it is the best joyful and convivial dance and music that you may attend if you visit one of the small villages in the Atlas mountains. 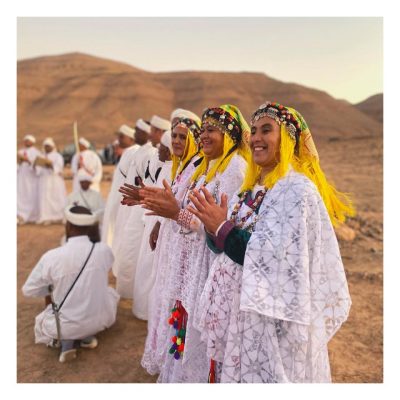 One of the old Moroccan folkloric Music dances in the Sahara in regions of Zagora played like a band with a lot of drumming instruments. Men and women stand side by side, they sing following the signs of the leader, who usually stands in front of the band. All in once they clap hands and sing poets. This dance is still performed during special events such as big weddings or in some famous Music festivals in Morocco.

Rokba Dance Was a very famous performance during the war back in time when Draa valley was a tribunal society. Nowadays Rakba performed at weddings and large community events within the southern villages of the Moroccan valleys.

Named after the person who holds the flute, who can play along with the drummers, holds Talount ( Drumming Amazigh instrument). This old type of Berber music in Morocco is famous in the region of Ait Bougmmez valley and the valleys around. Although Boghanim is very appreciated and brings a smile to everyone during the weddings in the Amazigh villages, this type of music is becoming rare and in the way of disappearance due to not being practiced and not being taught to the new generations.

Commonly known as “belly dance”  a Moroccan traditional dance, only practiced by women. The dancing performs at private ceremonies, such as weddings and circumcisions. Makes it hard for a tourist in Morocco to tend if not has been invited to a Moroccan wedding. This dance goes along with playing violin, drums, and Lotar. Recently this Moroccan dance is slightly taken to the next level to be taught in some dancing schools abroad. However, it is still private and not considered an art worth showing and saving.

Based on Shaabi music or Atlas music, this type of dancing is very famous in different parts of Morocco. During the special events and weddings, Shikhat dancing would be the best entertainment. This dance is an integral part of the cultural heritage of Morocco. Still, the Shikhat dance may be a type of intangible heritage that is in danger of being lost.

Click one of our contacts below to chat on WhatsApp