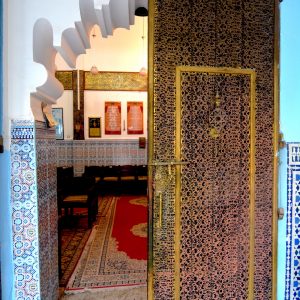 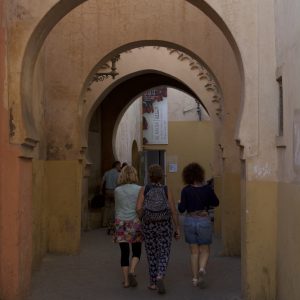 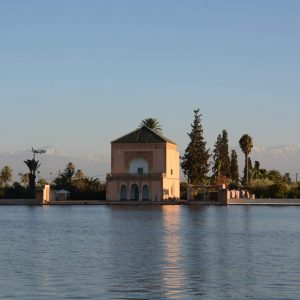 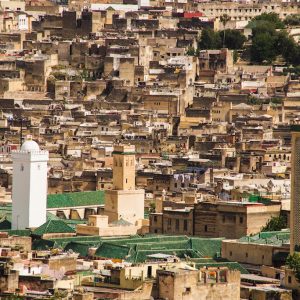 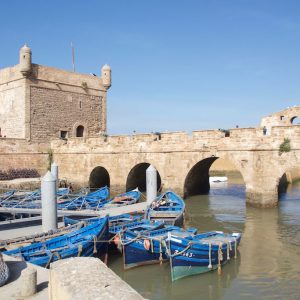 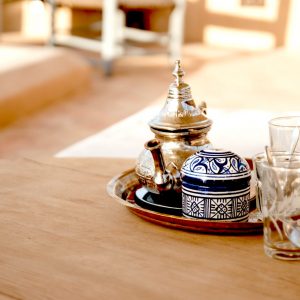 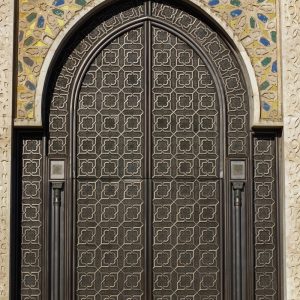 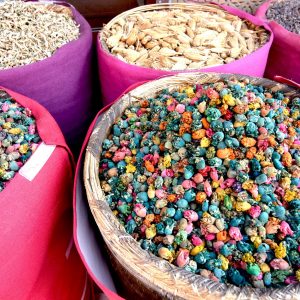 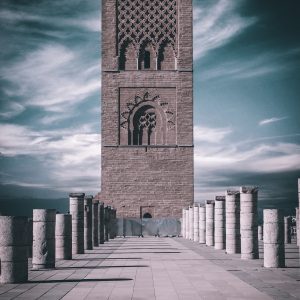 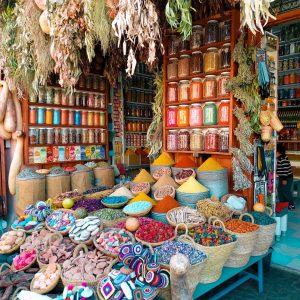 Morocco Jewish tour is 10 days of exploring the history and the culture of Jewish in Morocco, this tour is offering a chance to learn, in-depth, reflect the sights, personality, cemeteries of Jews.

For centuries Jews and Muslims live side by side in Morocco, in a big harmony almost in every city in Morocco. By 1949-1970 there were over 300000 Jewish that moved from Morocco to Israel. However, there is still few Jewish that still live in big cities like Casablanca, while there is a unique heritage left-back, beautiful Mallahs, a unique architecture that stands to present these Moroccans.

Our driver/guide will pick you up from Mohamed V airport, night in a hotel.

If time allows, We will start our tour by Visiting Temple Beth-El, the Jewish Synagogue in Casablanca. Beth-El is considered the centerpiece of a once vibrant Jewish community. Its stained glass windows and other artistic elements are what attract tourists to this beautiful synagogue. Overnight in a hotel

Today We start by visiting the Museum of Moroccan Judaism in Casablanca. Established in 1997, it is the only museum devoted to Judaism in the Arab world; this museum traces 2000 years of history and traditions of Jews in Morocco and particularly in Casablanca.

Visit Temple Beth-El, the Jewish Synagogue in Casablanca: Beth-El is considered the centerpiece of a once vibrant Jewish community. Its stained glass windows and other artistic elements are what attract tourists to this beautiful synagogue.

Visit the Ettedgui Synagogue: Is the most important Jewish site in the city, the synagogue situated in the medina of Casablanca. It was rededicated by King Mohammed VI of Morocco on December 20, 2016, after it was restored.

Visit the Mosque of Hassan II: The largest functioning mosque in Africa, a landmark of the city of Casablanca, Its minaret is the world’s second tallest minaret at 210 meters. The visit will take around 1 hour guided tour of discovery.

Later on, we drive to Rabat. Overnight in Rabat

Have a guided tour of the main sights of the city including Hassan tower, Mohamed V mausoleum, and Shella Kasbah.

Later on, we drive to Meknes, one of the imperial cities in Morocco, where we will stop by its famous historical sites including Bab El Mansour, the Meknes Stables, Hedim Square, the Thursday Gate, and the mausoleum of Moulay Ismail

After Exploring the Jewish Mellah & Quarter, we drive to Volubilis Roman ruins, known also as Walili one of the best archeological sites in Morocco, here you will have an hour guided tour to discover the site before we head to Fes overnight.

Due to Its medieval Jewish history, Fes is definitely a must-see city for Jewish tours in Morocco. It was known as the home for Rabbi Isaac Alfasi, a famous Talmudist, considered the first fundamental work in halakhic literature.

During your Jewish heritage tour in Fes, you get to explore the Mallah, the palace, the medieval universities, the museums, and cemeteries with a visit to the synagogue. Our local guide in Fes will introduce you to the history and the culture of Jewish and Moroccans along with the important Jewish sites.

Overnight in a Riad in Fes Medina.

Sefrou is a small town situated south of Fes, Seffrou was known as Little Jerusalem in history, due to its big Jewish community and its free religious life back in history.

Visit the Mallah of Seffrou, which makes up half of the old city.

Sefrou is a big example of the harmony between Muslims and Jewish in the history of Morocco, where they live door by the door with respect to everyone’s believes.

Take the road to Marrakech.

Few hours in the morning in Ifran, this small town with the European style where you can observe the Alpes architecture while walking in the gardens. Ifran is known as Switzerland of Morocco due to its weather and building style.

Later on, We drive crossing the Middle Atlas mountains, where you may want to stop for some pictures along the way. Lunch will be in Beni Mellal.

Arrive at Marrakech where we will drop you off at your Riad in the middle of the Medina of Marrakech.

Our Jewish guided tour in Marrakech led by a local tour guide will lead you to visit the best sights of Marrakech, while our driver will take you around to the sites outside the Medina.

Founded in 1558 by Abdellah El Ghalib one of the sultans in the Saadian dynasty, this Jewish carter is also known as Hay Assalam.

One of the most visited sites in Marrakech, one of the beautiful examples of the eastern architecture of 19 century. Gives its visitor a glance at the residence life of the viziers during the history of Morocco.

One of the main palaces for the Saadian dynasty, with beautifully varied architecture. one of the famous sites in Marrakech that is worth discovering.

Situated in the Medina of Marrakech, one of the oldest synagogues in the city that still functioning even today. The carter Where it is situated is back in the 15th century. The Sinaguge Conceder is a Jewish landmark and an interesting museum of Jewish life in Medina of Marrakech.

One of the colorful parts of Marrakech Medina, known also as Rahba Kadima, is a space filled with spices of all kinds.

Majorelle Garden and the berber museum:

Named after the artist Jacque Majorelle who created the garden in 1923. Majorelle Gardens covers two and a half acres has some of the best collections of cacti and sculptures. The garden consist also of an interesting Berber museum exhibiting objects of Amazigh culture, This Garden has over 700,000 visitors annually.

Depending on your interests, there are a lot of things to do in Marrakech in your free day.

Essaouira is a seaside medieval city with, an old Portuguese city, well-known with many names such as Mogador/ Tassurt. A very artistic city, famous as well for its annual festival of “Gnaoua music” located at 170 km from Marrakech on Morocco’s coast Atlantic.

Essaouira is a small coastal town, this city is a World Heritage site by UNESCO. The Medina is surrounded by the walls that protect it. The Medina of Essaouira, smaller than that of Marrakech, offers a wide variety of craft products. Another important area of Essaouira is a fishing port, where you can find many boats of blue color visit the beach and famous port of Essaouira on a day trip from Marrakech. You’ll take a guided tour of the port and have the opportunity to discover the marvelous Argan oil when you visit a Women’s Co-operative manufacturing this famous product.

Each year religious Jewish come to Essaouira for the annual pilgrimage to visit the grave of Rabbi Haim Pinto, who passed on in 1845. Today Rabbi Haim Pinto’s home and the synagogue are opened for Jewish groups as religious and historical sites to explore.

Departure from Marrakech or Casablanca airport. 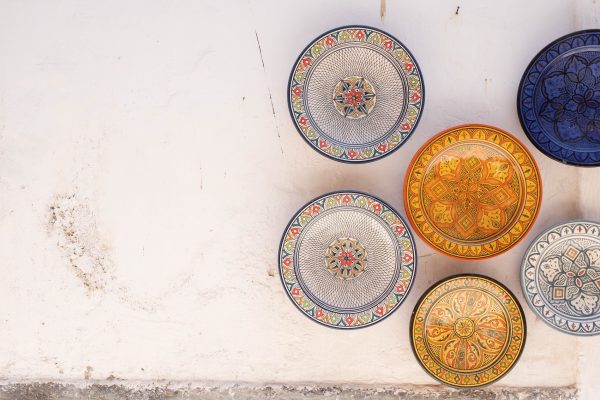 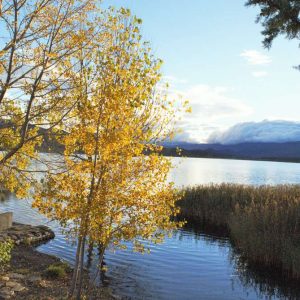 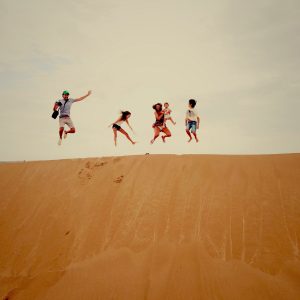 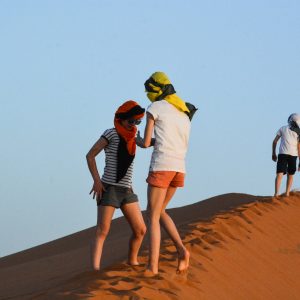 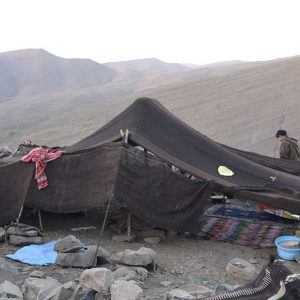 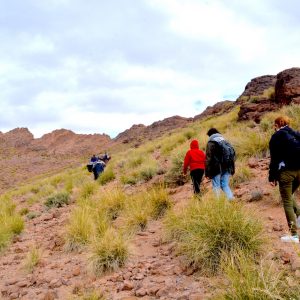 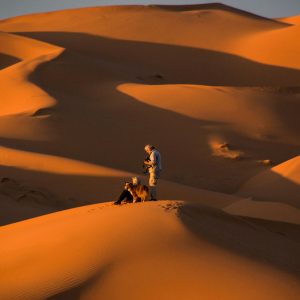 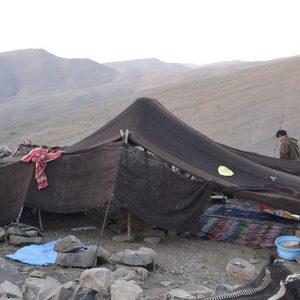